View Profile
Something incredibly unexpected is taking place in Karjat on the sets of Star Plus' Perfect Bride. 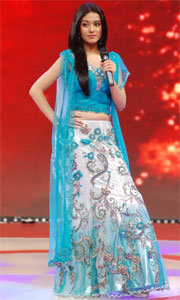 Featured Video
If sources are to be believed Amrita Rao herself would turn out to be the Perfect Bride on Star Plus' reality show that goes by the same name.

According to our source, "We have often noticed Amrita's searching eyes come to a smooth stop at Rajbeer's face. Even when she mentors Rajbeer the changed attitude is evident through she attempts at downplaying it." The source adds, "Already Rajbeer is receiving a lot of flak from the boys for being a sort of favorite amongst the girls. And now this new development could only add to his troubles."

The source further adds, "Then there is Priyanka who is ready to bite the head off of any girl who even glances at Rajbeer's direction. Wonder how she will react to the fact that one of the most eligible girls of this country is secretly nurturing a crush on Rajbeer."

It seems that the unpredictability of today's youth gives credibility to this rumor! "You never know. Amrita is of marriageable age and being a normal young girl she is bound to get attracted to good looking young men. And Rajbeer I'm sure like the many boys of our country is already bowled over by Amrita. If by the end of the show, they declare that they are going to get married, we will certainly not be surprised," says the source.

Well, Amrita has always been linked to her co-stars. Unless she makes the official announcement about her 'chosen one', we can only keep guessing!

13 years ago Rajbeer likes priyanka and priyanka likes rajbeer. even if amrita rao proposed to rajbeer he would say NO because he likes down to earth and graceful women :)

and im glad priyanka is a so called bahenji...she has culture and values and is very elegant. while amrita rao is trashy and exposes a lot

13 years ago atleast amrita is better than this priyanka behenji

13 years ago I think Rajbeer n Priyanka should make it clear now that they fancy each other as Rajbeer has already made up his mind he wants only Miss PS...they make a cute couple all the best to them....

13 years ago i dnt like priyanka at all, she does not suit Raj at all...he is a smart punjabi guy and wud luk with a girl as smart as him

13 years ago rajbeer and priyanka is the sweetest jodi but troubles are not leaving them .most of the girls are now falling for rajbeer wonder what will happen next

13 years ago WHO WATCHS DIS DRAMA...ALL DIS IS FOR TRP