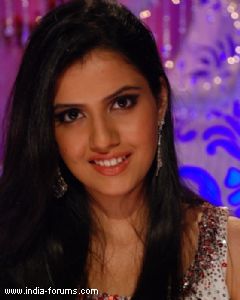 Pretty and chirpy Smriti Kalra, who was last seen playing the protagonist in Channel V's popular show Suvreen Guggal - Topper of The Year, is all set to make a comeback on television very soon.

Our source says, "The much loved actress Smriti has been finalized to lead opposite Anuj Sachdeva in Rajan Shahi's upcoming show on Sony Pal. Smriti's character will be playing an important part in Anuj Sachdeva's life in the show, who will be seen playing a sports coach in the show."

When contacted Smriti she told us, "Yes, I am doing the show and it's an interesting show. After Suvreen Guggal, this is the story I really liked and I am glad that I am part of the show."

We wish Smriti all the best for her new show!

shweta6767 6 years ago great news. welcome back our princess "smiriti kalra"
all the best :)

BinKuchKahe. 6 years ago can't wait to see Smriti back on screen.
All the best to her & the new show :)

sujairohit 6 years ago So happy to read the news.Welcome back Smiriti kalra missed you very much.

Mohabbateinn 6 years ago oMG &lt;3 yesss. smriti is amazzzinnng. i lovvveeed her in karol bagh :3

JensenVruShan 6 years ago Good to see you back on screen Smriti Kalra, you are very talented