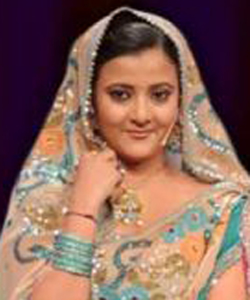 Smita Singh who is popularly known as Punpunwali in COLORS' Sabki Jodi Wohi Banaata Bhagyavidhaata is in pain, courtesy a scene wherein she had to hold on to a huge rod and break the cement put on the ground.

Explaining the scene, Smita tells us, "I have developed blisters on my palm, and I am unable to even hold the cell phone as I am talking to you. There was this scene where Punpunwali had to dig on the cement put around the tree and add a mixture of sugar and salt, so that the roots of the tree rot. She does this to prove that the tree to which Poonam got married has worn out because of her touch. In other words, she wants to drive home the fact that Poonam's curse can prove fatal to Bimlesh too, if she remains to stay with him".

Speaking about the weird things that Punpunwali does to harass the protagonists in the show, Smita states, "I simply love my character more than myself (smiles). But if I come face to face with a family member as bad as Punpunwali, I will not be a cry baby like this. I will rather prefer to kill that person and count my days in the jail (laughs)".

chronic 10 years ago What a surprise, even on TB, PPW gets more attention than the main leads of the show.....

Mehr-k 10 years ago oh punpunwali stop being so mean to your reel family have mercy on them . just sick and tired watching your evil tactics. and cure your blisters i.e have a break , so that vinay and bindiya could live peacefully and happily ever after.