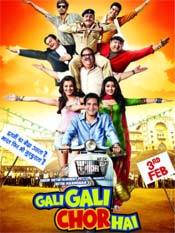 It is based on the true story of a journalist, Aditya (Anant), whose third heart attack sends him to the intensive cardiac care unit of a hospital, where he shares the room with an underworld kingpin, Shaukat Ali (Saurabh Shukla), a kebab fanatic whose is recuperating after his first heart attack. The climax unfurls how a man from the wrong side of law tries to transform. 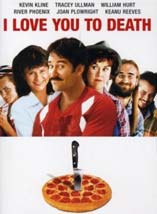 "Love You To Death" offers a potent mix of thrill and comedy. Director Rafeeq Ellias has tried to bring a wild, whacky comic thriller in Hinglish that pokes fun at the crazy times we live in.

Inspired by newspaper stories, it revolves around a bunch of bumbling murder attempts with characters as crazy as a doctor who is a 'sexpert' by day, a rockstar by night; and a theatre director who also organises 'supari' deaths. The film culminates in an art gallery with loads of blank guns, a single loaded pistol and some unexpected results!

It is the common man who has to bear the brunt of the corrupt system and this is central to the script of "Gali Gali Chor Hai". In the film, Akshaye plays a part-time Hanuman at the local Ram Lila and works as a full-time cashier in a bank. His character represents the quintessential common man and his problems.

Bharat's life goes upside down when he finds himself stuck in a hilariously vicious circle of corruption, having to bribe his way from cops to criminals, witnesses to lawyers, and even the judge, all in an effort to get out of the rut that is the Indian system.

Out of the four films, "Gali Gali Chor Hai" has some big names. If Rumi Jaffery has directed the film, the cast also boasts of Shriya Saran and Mugdha Godse. The film is a small budget project, and interestingly has been set in the small town of Bhopal in Madhya Pradesh.

Annu Kapoor, Satish Kaushik, Akhilendra Mishra and Vijay Raaz will also be seen adding flavour to the story and Pakistani actress Veena Malik has been roped in to spice up the script with her item number.

Scams and corruption had dominated the news headlines last year and "Married 2 America" throws light on something similar. Directed by Dilip Shankar, the film is said to be sensational and thrilling and the cast has names like Jackie Shroff, Archana Joglekar, Shweta Tiwari and Raghuveer Yadav.

The story is about architect Ravi Malhotra is an NRI, who lives in the US, works for Larson & Jason. The company's recent contracts was the Darbhanga Dam project in Saurabhpur district in Bihar, India and Ravi was the brain behind the project which has a 100-year warranty. But within a few years, three of the dam's gates burst open, leaving hundreds of people dead, thousands homeless and public property worth crore washed down. The Indian government is contemplating suing the company for damages worth millions.

So the company sends Ravi to India to investigate what exactly caused the damage and he hands over the report that contains a shocking truth to the authorities, but after that he goes missing. When he doesn't show up for three months, his distraught wife Anjali decides to fly down to India and search for him.

Marathi actress Archana Joglekar will be seen in a Hindi film after a long time. She had earlier featured in "Aatank Hi Aatank" (1995) and "Sansar" (1987). She also worked in TV serials.