The cast of Rajan Shahi's Yeh Rishta Kya Kehlata Hai is in a singing mood these days. In the coming episodes, the show will feature a special sequence where the actors themselves have sung a song. 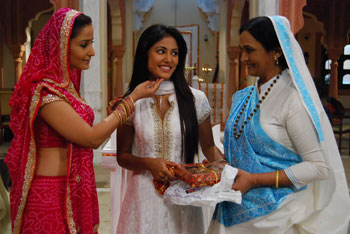 Featured Video
"There is a sequence in the show where the lead girl Akshara (Hina Khan) is confused looking at the album having pictures of various eligible suitors. She is puzzled as she does not know what to expect in her 'Mr. Right'. Depending on the situation, the members of the house sing the song", says Rajita Sharma, Creative Director of the show.

Divulging more details on the scene, she adds, "In the sequence the star cast sings and gives a message to Akshara on how her groom should be, and what qualities she has to look forward in a guy before she accepts any proposal".

The song 'Naar Naveli' has been specially composed by Rajita Sharma for this sequence.

She had earlier composed a song called Piya Bavari in the show. Talking about the actors themselves singing, she states, "They were bit apprehensive about it, but later on, all of them started enjoying the song, and the sequence has come out very beautifully. We also discovered that Hina Khan, the lead is a good singer".

Adding further, Rajita states, "I wanted to try something new and also persuaded Rajan for it. The final outcome is very nice and all are happy about it. We would be repeating this in future too", she quips.

When asked about the next song in the show, "It's called Ori Guddi Ke Saheli which is another unique song which will grab the interest of the audience. Though it's not glossy, it has its own uniqueness and I'm hoping that people would like it", she concludes.

When asked Rajan Shahi about the entire singing experience that the actors went thro', he said "Amardeep Jha sung very well. Even Vinita Malik, the Dadi in the show has a good voice, and so does Lataa Saberwal. Hina Khan, who plays Akshara has a sweet voice and the song has come out exceptionally well".

This special episode will be aired this Tuesday and Wednesday.

ANKITA123456 13 years ago I LOVE YOU NETHIC AND AKSHARA. AKSHARA YOU ARE SO SWEET
ANKITA

13 years ago Akshara really had a lovely voice. Loved this singing sequence. really different from other shows. ^_^

13 years ago very nice show!! at least they r trying something different.. n omgg askshara DOES have a good voice.. on sbs she sang rly well

+ 2
13 years ago this show is different, but the pace of the show is kind of slow. i''m glad they''re adding some song sequence in there!

13 years ago this show is wayyyyyyyyyyyyyyy betta than all the crap tht is shown on other channels.