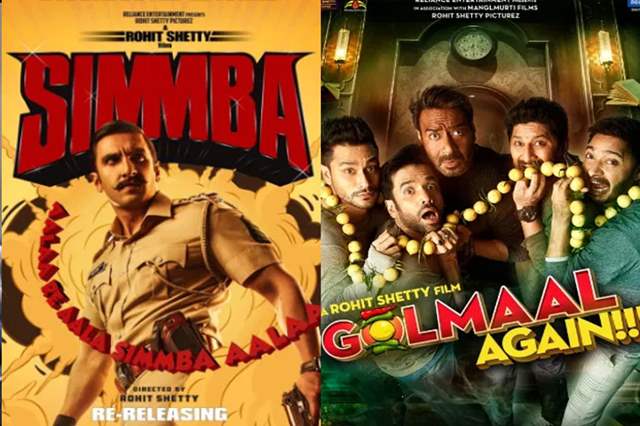 As lockdown continues there is still a range of regions that have eased measures. India may not be equipped enough to do that and USA too isn't but the latter is doing that a series of films are getting re-releases in an ode for theaters to re-open. Mega successes Simmba and Golmaal Again are going to be one of the first films to mark a re-release in the USA inRegal Virginia Center and Regal Countryside, Virginia starting 28th August 2020.

The news was confirmed by the production banner, Reliance Entertainment in their latest social media updates. We hope Ranveer Singh, Ajay Devgn and Rohit Shetty fans are reading this news piece.

Both the movies will be re-released in Regal Virginia Center and Regal Countryside in Virginia, finally infusing entertainment back into the lives of the people who have remained away from cinemas due to the ongoing COVID-19 pandemic. The pandemic got countries across the globe practising social distancing with individuals remaining back at their homes. Sharing this news on their official Twitter account, Reliance Entertainment tweeted, “Time to Go Go Go #GolmaalAgain! The blockbuster is re-releasing in Regal Virginia Center and Regal Countryside, Virginia, the USA from 28th August 2020.”

Followed by tagging the star cast of the movie their Tweet announcing the re-release of Simmba read, “#Simmba is set to take the USA on a roller coaster ride of Entertainment! Re-releasing in Regal Virginia Center and Regal Countryside, Virginia, the USA from 28th August 2020.”