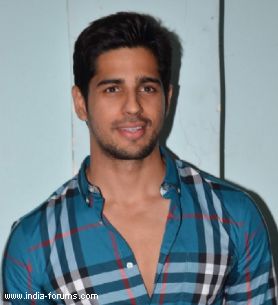 Sidharth Malhotra's mother is surprised after watching him in the teaser of Mohit Suri's upcoming next film, "Ek Villain" as she feels it is something different from his real life personality.

The young actor, who made his Bollywood debut with "Student of the Year", was recently seen in "Hasee Toh Phasee" and in both the films, his romantic, loverboy image was appreciated.

But the teaser of "Ek Villain" has showcased Sidharth in an all new avatar as he will be seen playing a grungy, dark and intense role for the first time.

In real life, Sidharth is said to be shy, reserved and quiet. Hence, after watching the teaser, the young actor's mom was in for a surprise.

When contacted Sidharth, he shared: "I am essaying a very different role in 'Ek Villain'. It is unlike what I have done previously. The teaser trailer has received positive feedback from all quarters and it is overwhelming."

The source also said that Sidharth's mother has been constantly receiving positive feedback from family and friends and she is keenly looking forward to more content from the film, which also features Shraddha Kapoor.

The movie will release June 27.