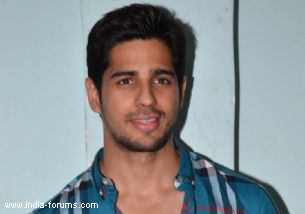 Model-turned-actor Sidharth Malhotra, who is from Delhi, says he will cast his vote if he gets time and urged youngsters to participate in the elections and exercise their voting rights.

The 29-year-old, seen in films "Student of the Year" and "Hasee Toh Phasee", currently lives in Mumbai to pursue his Bollywood career.

"If I will get the time, I would want to go to Delhi to cast my vote as my voting card is from Delhi," Sidharth told reporters here Tuesday at the red carpet of the Mijwan Fashion show.

The general elections start April 7. In Delhi, voting will take place on April 10.

He further made an appeal to everyone to cast their vote and said," We can't complain if we don't vote. So everybody should cast his vote. I would want all the youngsters to participate in these elections and cast their vote."