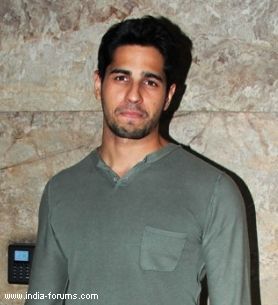 Ahead of the release of his forthcoming movie "Ek Villain", actor Sidharth Malhotra is excited to make his TV debut as the host of "Ek Villain Ek Daastan", where he'll take viewers through the lives of some of Bollywood's most loved bad boys.

The show will be aired on Bollywood entertainment channel ZoOm starting Monday.

Sidharth is excited about his first venture on the small screen.

But "more than that", he is "honoured to be part of discovering Bollywood's iconic villains and 'Ek Villain Ek Daastan' is so much more than just a show to me."

"We as actors draw inspiration from our seniors and veterans and I am lucky I have received this opportunity to learn more about their journey hands-on," the actor, who made his Bollywood debut with "Student Of The Year", said in a statement.

Villains have been an integral part of Bollywood. From their unique looks to amusing dialogues, these villains have etched an image in the minds of film buffs.

In honour of such iconic Bollywood baddies, zoOm has collated their individual filmography, on-screen memories, behind-the-scene happenings and some interesting stories about them.