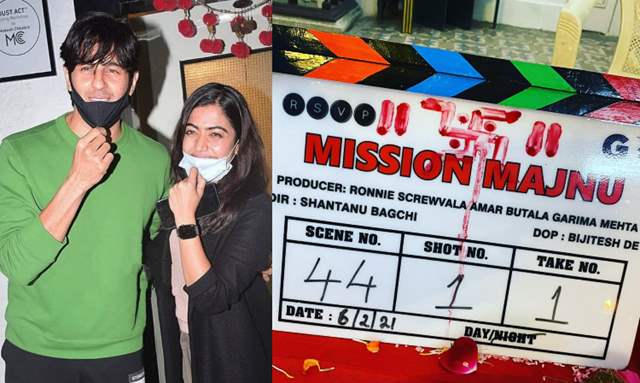 Actors Sidharth Malhotra and Rashmika Mandanna have collaborated for the first time for a film called Mission Manju and they have finally kickstarted the shoot for their upcoming film in Lucknow.

This Shantanu Bagchi directorial is backed by Ronnie Screwvala's RSVP Movies, and it is being produced by Amar Butala and Garima Mehta.

RSVP Movies took to their official Twitter handle to announce the film going on floors. Sharing a picture of the clapboard of the film, they wrote, “The first chapter of one of India’s deadliest covert operations begins today! #MissionMajnu commences shoot in Lucknow.”

On the other hand, Sidharth Malhotra also shared the picture of clapboard as he wrote, “Mission begins Flexed thanks sid #MissionMajnu”

The film will be shooting at the Jahangirabad Palace in Hazratganj, La Martiniere, on the city roads and also in Malihabad and It’s going to be a 45-day long schedule in the city, reported Times of India.

The film narrates the story of India's most courageous mission set in the 1970s, featuring Sidharth Malhotra, where for the first time he will play a RAW Agent.