And while there are newbies who shy away from sporting a bikini in their very first film, Shruti seemed to be game 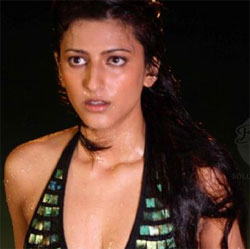 Featured Video
for it!

Says the debutant, "When Soham narrated the script, I did not even consider the bikini thing as a big deal it was logical to the premise. While shooting for it, the weather was very weird that day. It was freezing cold, but apart from that it was like any other scene in the film for me."

Informs the Director Soham, "Shruti did work out to get a toned body. Moreover she worked more hard to maintain it. We shot the sequence in Cape Town. The temperature was only two degrees. She had to brave the icy weather for the shoot."

The director also mentions, "The scene involves Imran Khan, Ravi Kishaan and Mithun Chakraborthy. Shruti was not at all apprehensive of wearing a two-piece swim wear as she was aware of it from before. The scene is totally justified as Ravi Kishaan's character pins his eyes on her."

The styling is done by the director's wife, Binal Shah who is a fashion designer. She says, "I bought a plain Bebe bikini that fitted Shruti perfectly. I then embellished it with mother of pearls in shades of green that matched the night pool ambience."

Well, for a debutante, Shruti's confidence and zeal are quite inspiring, we must say!

'Luck' is an action adventure film that has been creating waves & arousing lot of anticipation from audiences for its daredevil stunts and amalgamation of some of the finest actors of Indian Cinema.