The production house Shreya Creations which has made shows like Piya Ka Ghar, Ek Ladki Anjaani Si, Kaajal, Ranbir Rano, Jahan Pe Basera Ho and the currently airing Bhagyavidhaata on COLORS have apparently not paid some of their unit members for the past many months, owing to which many have moved out of the company for better prospects. 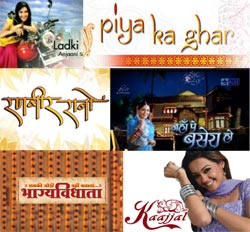 "Even after repeated reminders via telephone, SMSs, personal visits to their office, they did not receive a single penny for the efforts they had put in for the organization. Initially, Tanya Sanjay kept giving them various dates to collect the same to which they waited patiently. There were always new dates coming in, but no cheque. After a while she stopped attending to the concerned people whenever they came to meet her in the office and stopped taking their calls", adds our source.

It is also heard that the Supervising Producer, Mr. Aman Khanna who had been serving Shreya Creations from long, and was part of four of their successful shows, and was also part of the pre-production phase of Bhagyavidhaata, then titled Reet was forced to leave the organization, as they stopped paying him.  While parting, he was asked to collect the payment of his working tenure with them by 30th of Jan'09, but has not got a penny till date. "Shreya Creations anyways has a very bad reputation in the industry as far as payments are concerned to the extent that they don't even issue TDS certificates to people for years in spite of deducting it. When these people got ignored by Tanya Sanjay, they approached Mr. Sheel Kumar, who had told them that only Tanya could do anything about it", adds our source.

One of the affected unit members on terms of anonymity told us, "Ms. Tanya Sanjay acts in such an unprofessional manner that there have been instances where she has shut the main door of the office and has worked from the back door so that people think that the office is shut whereas the whole team including her sits inside and works. This was done to simply avoid people whose dues were to be cleared by the organization. There have also been instances where in Equipment Suppliers have come and abused her loudly in her office for hours because she hadn't paid them for their previous shows. Also, there have been numerous times when the shootings have got stopped for hours by the people she has to pay. She neither meets the people she has to pay nor gives any reason for not paying".

Recently, things apparently went out of control when an Executive Producer cum Scheduler who had worked on Bhagyavidhaata and was not paid for three months was asked to leave the company. Says our source, "The guy is still waiting for his payment, and in the meanwhile has filed a civil case against the production house for non- payment. In fact a second unit director of their previous serials had to file an FIR against the production house because the authorities had scared him of being bashed up by goons if he bothered them by asking for his dues. Finally he was made his payment only after the police intervened and the authorities were called in at the police station twice".

We called Mr. Aman Khanna, who has served as the Supervising Producer for Shreya Creations, and he confirmed the news and said, "Yes, it is true that for no reason, my payment has been withheld for the past 7 months. I have been part of five of their successful shows, and all was fine till Sheel Kumar was taking care of the proceedings. I have been trying hard to collect my dues for so many months. If I don't get my dues, I will be forced to file a case in the court".

When contacted, Sheel Kumar of Shreya Creations rubbished all this, and said, "This is all baseless. All are rumors, wonder who has been telling you all this…". When asked him whether he had been approached by the people who had not been paid, he stated, "I don't know. I will have to look into the issue".

We called the lady in question, Tanya Sanjay who categorically stated that, "I am just an employee in the organization, and do not own Shreya Creations. So it would be better if all the unpaid people approached the association to get their payments".

Now with the recession having gotten better, we just wonder what's keeping the production house from promptly paying their employees…

Premkhanna 12 years ago It is the main practice Shreya Group is having.
The other Telematics company named Trackon Telematics P ltd.(Formerly known as Shreya.com) in which Sheel is the director, all the employees majorly from sales as well as software development dept. has left becuase of the same reason from last 7-9 months.
The group is just making fools around .. towards their prospects, clients, employees as well as investor.
Even the rent of the place where Tracon telematics is being operate has not been paid for last more then 3 months.
The Owner of the place,Mr.Makwani is always in search of the Managing directors for his Balance Rent.
There were more then 18 people in Sales &n Mktg, and 10+ people in development & Website designing and maintaining.. today 100% of staff from both the dept.s has already left due to non-payments of Salaries for more then 3 months. Shreya Group or Trackon Telematics both are using great experiences, capabilities and expertise of the new employees and then make the situation like there is no money with company to pay..in that situation an Employee can't even leave the company as his outstanding of 1-2 months salary will go on toss.
At the end..when an employee come on the decision that he will not going to work for free anymore.. they immediately accept the resignation with false commitments that within one month their dues will be cleared..which will never get cleared even after a huge follow up of aleast 7-8 months even. The entire story is totally true for Trackon Telematics P ltd, (Previously known as Shreya.com).
The employees in Trackon who have left the organization and still not received their dues are Sachin, Arvind (Both are the team leader for Software dept.), Mr.Vaibhav Chougle(Last Branch Manager for Mumbai HO), Mr.prabhakar (Earlier worked with reliance(branch manager Delhi), Mr.Rahul Varma 9Asst Manager - Sales0, Ms.Nidhi Dhanani, Ms.Payal Hamlai, Ms.Mrunmai Pawar, Mr.kedar Paranj...

12 years ago Totally agree with luv_pavi and Imran94. Very well said!! It's because of them that such good shows were butchered to death!!

+ 5
12 years ago
Shreya's Creations are so Unprofessiona, they should be out of business !

12 years ago Shame on them for schemeing people out of their wages .

+ 3
12 years ago This is really sad - People in front of the camera get all the accolades and those behind the scenes are left in the lurch. And the whole part of closing office doors and still working inside.. terrible! Why not just pay off the dues and finish the matter? Its so many people's hard work gone into these shows..

14 years ago yes..he's son is so adorable..like father like son

14 years ago HAVE A WONDERFUL HOLIDAY AKKI...UR SON IS SO CUTEEEE!!!!
LOOKING FORWARD TO WATCH UR NEW RELEASES!!!! LOVE U

14 years ago lol awww his son looks just like him! :D

14 years ago thanks... great article. It's great to read about his soft spot for his family, and i'd never seen his son before, he's so adorable!