View Profile
After a marathon shoot of around 60 days in Thailand, Shree Ashtavinayak Cine Vision's much-hyped multi-starrer 'Blue' is now complete, with only the film's songs remaining to be shot. 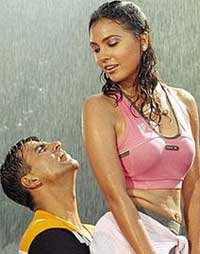 'Blue' is directed by Anthony D'Souza & is reportedly the most expensive film made In Bollywood! The film stars Sanjay Dutt, Akshay Kumar, Lara Dutta, Katrina Kaif, Zayed Khan & Rahul Dev and promises spectacular stunts and breathtaking underwater sequences. The Music for the film has been rendered by none other than A.R Rahman & choreography is by Mr. Keith Young.


The shooting of Neeraj Vora directed & Govinda starrer comedy 'Run Bhola Run' is now complete with the exception of a few songs remaining.