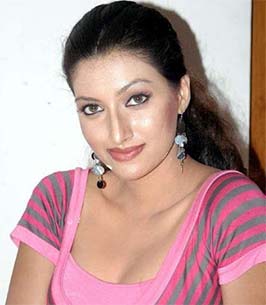 "The character required me to learn horse-riding, archery and sword-wielding. It takes about three hours for me to get ready for the role with the costumes and make-up. It was a physically demanding role and pulling it off was challenging," Hamsa told IANS.

But Hamsa is not complaining because the role gave her scope to perform.

"I play a character with two shades. My character has a surprise element for the audience. All these things make it a very special character. It was a wonderful experience because I had the opportunity to perform something I haven't done before," she said.

"Working with Gunasekhar and Ilayaraja makes it even more special. It's a combination audience will look forward to. I'm waiting to shoot a song composed by Raja sir. I'm very excited and looking forward to it," she added.

Any reference point for the role?

"I didn't idolise any actor for my role, but I did take some inspiration from Keira Knightley's film ('King Arthur') in which she plays a warrior princess too. My character is akin to hers in the film. Both our characters are strong and sensuous," she added.

Priyanka Chopra praises Sonu Sood as UNDP confers him with ...
6 minutes ago