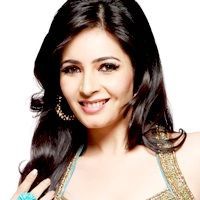 After surviving many evictions from the 'Bigg Boss Season 5', model-actress Shonali Nagrani is finally out of the reality show.

Shonali has survived many evictions in the past, but she couldn't escape the latest round, in which she was nominated alongside Amar Upadhyay.

Usually a calm person, Shonali has had a few tiffs with her co-participants Pooja Missra, Siddharth Bharadwaj and Akashdeep Saigal. But she was blamed many times for being a gossipmonger.

These apart, the 'Bigg Boss' house recently saw a new addition with Australian cricketer Andrew Symonds entering the show as a contestant. Ex-contestant Pooja Missra also made a comeback as his translator, but she is no longer a contestant.

9 years ago hello Juhi Parmars name too is there in this article..whose gonna tag her????? IF dnt be partial

+ 4
9 years ago honestly shw was one of my fav contestants...i know she was dumb and stupid in playing game but atleast she was not a part of any dirty cheap politics..i found her a very nice person by heart

+ 2
9 years ago am confused now...this article says andrew is contestant whereas sanjay dutt has been saying he is a guest...aakhir woh hai kya

+ 2
9 years ago I LIKED her when BB5 started, but then i came to know what actually she is behind this innocent face beauty.
i must say she is the drama queen,
and i'm glad that Amar survived.

now i want Sid to be out. he is such a pain, innocent looks with evil plans.

he is so fake, so as She was.
any way.
this time BB5 is really not worth to watch, its only SALMAN for me who is the reason to watch it.

9 years ago i reallly liked her...amar reallly i cant stand his face any more...

+ 3
9 years ago amar shud hav gone...wud hav been more interesting...now sid's all alone...lol i wonder how nominations will go next week...sky,juhi,sunny and amar will all nominate sid but will hav to nominate one another as well as pooja n symonds cant be nominated...

+ 3
9 years ago It was SO obvious when we got to know that it was Amar that was nominated along with Shonali...

+ 2
9 years ago She was the only person left, that I actually liked..sigh so sad