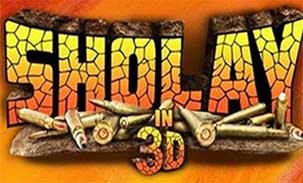 Bollywood superstar Salman Khan is in awe of "Sholay 3D" and the stars associated with it.

The 3D version of the cult movie "Sholay" came out Friday.

The 48-year-old has called the movie "a journey", and said that he has never seen such a performance in any movie.

"It's a cult film, experience it, it's a journey. The way the film is written, directed and produced 30 plus years ago," he tweeted.

The 3D version is the brain-child of Sacha, grandson of G.P. Sippy.