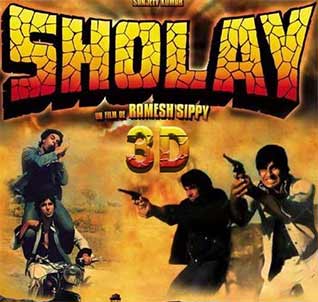 As "Sholay 3D", the 3D version of the 1975 action drama "Sholay", gets ready to hit the theatres Friday, several moviegoers are gearing up to to catch the action on the big screen for the first time here.

For Rakesh Arora, a student of D.G. Vaishnav College, watching the classic in a movie hall is an exciting opportunity.

"I've watched the film several times on my computer and television, but never in a cinema hall. I have grown up listening to stores told by my father about the 'Sholay' experience in a theatre. Some films are best enjoyed on the big screen and this happens to be one such film," Arora told IANS.

"I'll be going with my entire family to watch it," he added.

Theatres opened bookings for new releases Wednesday. Several multiplexes which screened "Sholay" 39 years ago will be screening it again.

"We are expecting houseful shows in the opening weekend. Sadly, the film will have just a week before three Pongal releases will come out. However, we are hoping it will be received well. 'Sholay' ran for over 100 days at our theatre when it released," a representative from Satyam Cinemas told IANS.

It was not just at Satyam Cinemas, but even at a few other theatres here that the film completed 100-day run, said film historian Anandan.

"It was a phenomenal hit in Chennai. I remember watching the film for Rs.15 in 1975 with my family. Besides Satyam, it had a 100-day run in other theatres such as Casino and Pilot. Watching it on the big screen back then was a different experience altogether because it was the first 70mm Indian film. The experience was out-of-the-world," Anandan told IANS.

"I'm sure people would love to revisit it on the big screen. All the youngsters who have heard stories about the film's experience, can now watch it to see for themselves," he added.

For Anand Venkatraman, a 64-year old retired bank employee, "Sholay 3D" will be a reason to go back to a theatre.

"I haven't watched a film in a cinema hall in the last 20 years. I hardly watch them on television too because most of them are bad. 'Sholay' is one film I can never get tired of watching. To watch it in theatre again is an opportunity I don't want to miss," Anand told IANS.

The 3D version of the film is produced by Sascha Sippy, grandson of G.P. Sippy who had financed the original. The new movie promises to offer a fresh viewing experience to the audience when it hits 1,000 screens.

Reportedly, the makers of the 3D version have spent over Rs.20 crore on the film. Movie patrons, however, have a mixed opinion about the 3D experience.

"I have only been hearing about 3D films, but have never experienced them. I just hope it doesn't spoil the experience that the film can deliver on the big screen. I have been reading that several filmmakers use this format as a medium to mint money. I hope that's not the case with 'Sholay'," said Venkatraman.

"The 3D format is a hit regardless of the quality of films being made in it. You need it to attract the younger audience to the cinema halls. I'm sure watching it in 3D will be a different experience too. I think it's best to watch it and then comment," said Anandan.