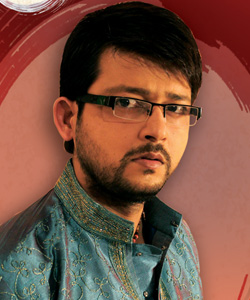 Imagine's new show Armanon ka Balidaan-Aarakshan which deals with a love story that blooms amidst issues raised by the quota system saw a major high point in the second episode itself.

As per the present track, Shivam (Rahoul Lohani) is a depressed man as he has not succeeded in getting thro' the IAS exams for the fourth successive time. He is doubly upset as this was his last attempt for securing an IAS seat, and this forces him to kill himself.

Yesterday's episode saw Shivam shooting a bullet right into his head, and the freeze happened as his family is startled and shocked at this development.

Our source tells us, "Shivam will be pronounced to be critical by the doctors and this creates some anxious moments for the family. There will be a scene wherein Shivam's mother, played by Anita Kulkarni recollects her elder son Priyam's death and weeps a lot. She literally thinks that she has lost Shivam too, and blames her husband Kamlapathi (Muni Jha) for being responsible for the death of both her sons. However, Shivam will survive the death scare and get alright".

However, the creative team has not yet decided on the impact of the injury on Shivam, and will take a call soon on whether he will be shown to be fine or will have some problem or the other. But it is certain that Shivam will be back in action in few episodes.

"As soon as Shivam comes home, he will see his family members sobbing their heart out and this irks him more. To make matters worse, he will also get to know that his friend who had secured lesser percentage of marks when compared to his marks has secured a seat for IAS due to the quota system", adds our source.

Soon the outburst of Shivam will be shot, wherein he will tell his family that it would have been better if he had died after the bullet hit him.

The coming episodes will also witness the entry of Akash, the District Magistrate and the male lead of the show, played by Aarya Kumar.

Tune in to Armanon Ka Aarakshan on Imagine at 8.30 PM…

10 years ago i was kinda shocked wen i heard the bullet going off.. but CV's planned it to be All Iss well :) :) btw this one's a nice show..quite interesting!!!

10 years ago So sad...but this show looks different...

But can we have an article on new Star Plus show Dor??