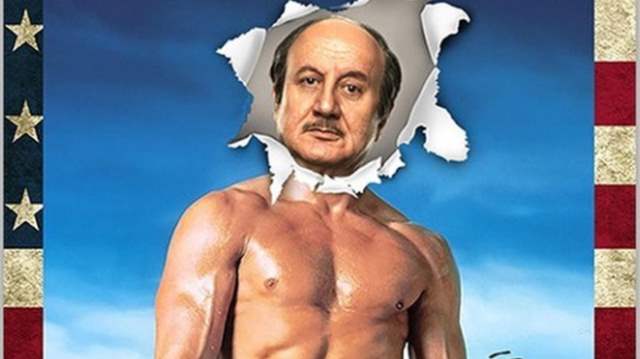 Recently boxer Mary Kom graced the poster launch event for Anupam Kher's upcoming film Shiv Shastri Balboa. Many pictures and video fom the event got viral and piqued the interest of the fans about this unique concept film.

Toady yet another quirky poster of the film is out shared by Anupam Kher.

As per the latest update, Shiv Shastri Balboa is scheduled to release in theatres on February 10. The news was shared by the veteran trade analyst Taran Adarsh on his official Twitter page. He shared a new poster of the film and wrote, “ANUPAM KHER - NEENA GUPTA: 'SHIV SHASTRI BALBOA' ON 10 FEB... #ShivShastriBalboa - starring #AnupamKher, #NeenaGupta, #JugalHansraj, #NargisFakhri and #SharibHashmi - to release in cinemas on 10 Feb 2023… Directed by #AjayanVenugopalan... Produced by #KishoreVarieth.”

Kher's face has been morphed to fit the body of a powerful boxer who is ecstatically showing off a championship belt. A dog is depicted on the billboard as well, purportedly stating, "Fata poster nikla." Kher, the dog, and Neena Gupta were all seen on an earlier poster for the movie, which was unveiled last year. Sharib Hashmi plays a crucial part in the movie as well.

Kher had a successful last year as three of his movies, The Kashmir Files, Karthikeya 2, and Uunchaai, were box office hits.