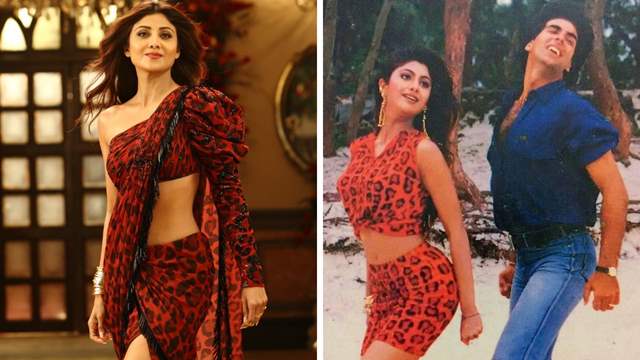 While the original song from Main Khiladi Tu Anari featured her in a two-piece animal print outfit paired with high boots and danglers, her look in the new video is a nod to high fashion! This time the ageless beauty is seen donning the same animal print but in a voguish Sari with a high slit.

With a wavy hairdo and minimal accessories, the diva looks straight out of a fashion runway in the video.

Sharing the deets behind the look, designer Mohit Rai said in a statement shared with us:

"We wanted to give homage to the iconic 90s song. While paying our ode to it, we recreated the look that is relevant to contemporary style. We went with the same leopard print but embellished it and used a darker tone because the song has a celebratory mood. While keeping the original framework, we wanted to create something modern in accordance with Shilpa and her character's style."

Meanwhile, Meezaan was all nervous while recreating the iconic number but he pulled it off spectacularly with his dance moves.

Directed by legendary film-maker Priyadarshan, Hungama 2 is set to hit the screens on 23rd July packed with limitless fun, entertainment and loads of confusion.

Reprising the role of Radhe Shyam Tiwari, actor Paresh Rawal is back in Hungama 2 along with his beloved wife, Anjali Tiwari essayed by the quintessential actor, Shilpa Shetty Kundra. Meezaan takes on the role of an ideal son caught in the middle of this chaos, as Pranita Subhash takes on her first Bollywood role following an illustrious career in South Indian cinema.

Hungama 2 also features the kings of India’s comedy scene - Johny Lever, Rajpal Yadav and Ashutosh Rana - all of who will bring their A-game to this roaring comedy.