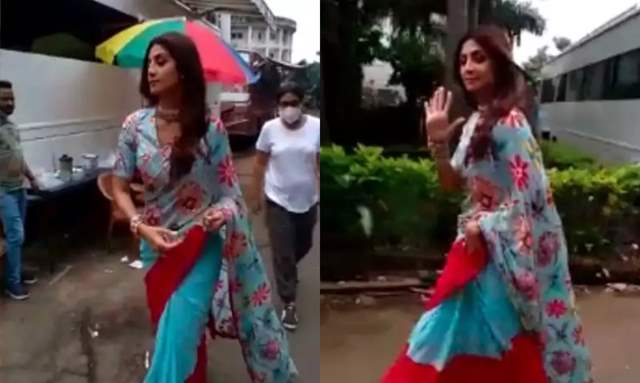 It’s been days since businessman and Shilpa Shetty’s husband Raj Kundra was arrested in a pornography-related case. While the trouble kept mounting for the family, Shilpa stood strong by her children. Amid the entire controversy and court trials, the actress took a break from reality TV show Super Dancer and she is finally back on the sets.

Shilpa was photographed stepping out of her vanity van in a blue and red saree on Wednesday (August 18). She also waved to the media before walking onto the set. Shilpa did not interact with the media, unlike the previous times.

The Hungama 2 actress’ pictures and videos are going viral on the internet and Shilpa can be seen wearing a saree, exiting her trailer and walking towards the set in silence.

A Hindustan Times report quoted a source saying, “The makers had been in constant touch with her and only recently she decided that she was ready to make a comeback. Shilpa wants to get back to work not just for her kids and family but also for her own sanity. She was welcomed warmly by the Super Dancer team, which made her quite emotional in the morning."

Meanwhile, a TOI report quoted a source speaking about Shilpa’s resumption of the shoot and said, "Shilpa has judged the show since it started in its first season in 2016. The makers were waiting for her to return and did not want to get another celeb in her place. We are glad that she has resumed shooting. Hopefully, she will continue on the show till the end of this season."

Shetty, who has also been rather active on social media for a long time has chosen to be sporadically active ever since the controversy began. And while the actor might be selectively active otherwise, she chose to post on this special day wishing everyone on the same as she captioned, "Wishing all my fellow Indians around the world a very Happy Independence Day”

1 months ago Oh God am so happy for shilpa mam...the whole country loves her .she is a darling to all... everyone knows she is innocent and pure angel...she is so innocent and delicate person with heart of gold..love u mam

+ 4
1 months ago It is a good decision to go back to work. If she is innocent then she should not let Raj's deeds impact her career

+ 6
1 months ago Please check your title. RK is repeated.