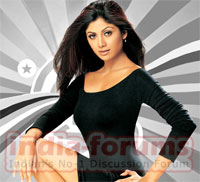 Shilpa Shetty is on a high. Her musical, 'Miss Bollywood', has brought in one standing ovation after another, as she tours with it. And now, her perfume, S2, raised more than Rs 12,00,000 at an auction in UK last week. The money was raised by fashion tycoon Danni Passi. According to Shilpa's publicist, Dale Bhagwagar, the actor is thrilled. "What's remarkable is that the sum raised from auctioning the S2 perfume topped other auction items like a diamond and ruby necklace, and a Cartier watch," he added.

The proceeds of the charity will be going to Anamika, a charity organization for underprivileged children in India.