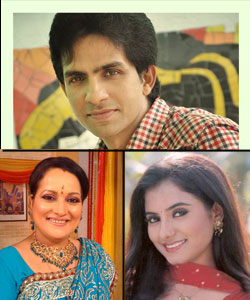 Doordarshan is all set to bring in a new comedy show, Kaanafusi, which will be loosely based on the lines of Bollywood super hit movie Hero No 1. The show will have Shiju Kataria (fame Star Plus' Behenein) playing the lead. Theater actor Jay Patel will play the male lead.

"The show basically tells about a girl likes to be independent and also likes get into a live-in relationship. The show will be aired thrice a week, from Wednesday to Friday at 10:30 PM on Doordarshan", adds source.

We contacted Shiju Kataria and she confirmed saying, "Since the show demanded just five days a month there was no issue for me. Kaanafusi is a good and interesting show."

We tried hard to contact Himani Shivpuri and Romanchak but both remained unavailable for comments.

Watch this space for more details.

HaHaHeHe-Hupp 9 years ago guys , i had seen romanchak last time in kggk nearly ten years ago . i have to watch this show for him how he looks now???? after taking fst leap in KGGK he disappeared like dodo disappeared from world...

Amanda Seyfried Announces The Birth of Second Baby
26 minutes ago

NCB Dismisses Rhea's Claim of 'No Jurisdiction in Drugs ...
27 minutes ago