Shekhar Suman, known for being vocal with his thoughts yells at the girls & tells them that they should stop being fake and be honest if they want their opinion to be taken seriously. 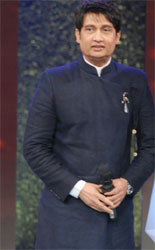 Featured Video
Mentor of STAR Plus' reality show Perfect Bride, Shekhar is known not to mince words when agitated about something. He just lost his cool at the female participants at the gala episode shoot in which for the first time the 'Bride of the week' Priyanka Sharma had the power to eliminate a boy and his mother from the house.

It's been four weeks now, and all the mentors have been closely watching the happenings inside the home in which they see that the participants do not shy away from their feelings about each other, but when they come together to shoot the gala elimination episode with the three mentors, Shekhar, Malaika Arora Khan & Amrita Rao, they just tend to suppress their feelings for fear of looking bad on national television.

There are many issues that have come up in these four weeks like color discrimination, food habits, vegetarian & non-vegetarianism, favoritism and insecurity of being voted out without having a chance to get to know their life partner. In the house, as they're watched over by cameras 24x7, the girls, boys and their mothers are seen showing the real sides of their personality, but they tend to adopt a diplomatic, sitting on the fence stance when they're in front of the mentors during the elimination. This made the mentors very upset because issues were being brushed aside which could lead to huge misunderstandings later. Malaika insisted saying, "stop being diplomatic & confront your feelings!"

Did Rumpa, Gaurav, Priyanka, Hitesh's mum & the others speak their mind after getting a dose from Shekhar or just let the opportunity to face their fears pass?

Tune into STAR Plus' Perfect Bride every weekday at 10 30 pm and weekends at 10 pm.

mustlog 11 years ago Ever young man :)

13 years ago express yourself guys! it's life time decision. what r u all kids!

ps. i think gurpreet and the guy she likes( i forgot his name) look best together! if they got out i will quit the show! all my american friends watch it when they come over and they think it's really cool how u guys interact and talkk and most of all fight.
Love YOu guys

13 years ago I dun think they even take it seriously.. all the girls nd the boys are playing nd flirting with each other.. Nobody's gona end up together!! they all look like fake dolls in the galas waise...

+ 2
13 years ago i don't watch this show...lol. it's funny though that he yelled at them about that.

+ 3
13 years ago In short Shekhar wants them to quarrel and add to the trps.