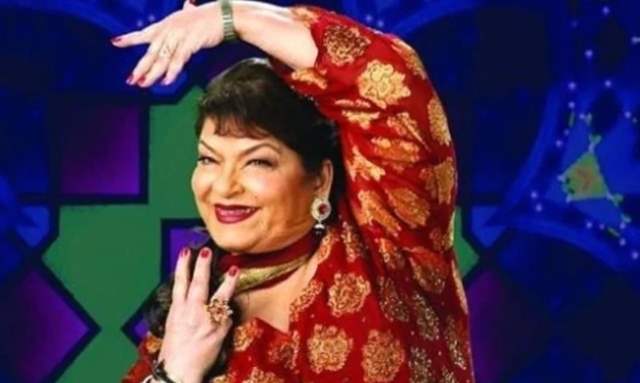 Bollywood’s dancing legend Saroj Khan passed away on Friday morning. The veteran choreographer suffered a cardiac arrest and died at the age of 71. Earlier, she was admitted to Mumbai’s Guru Nanak Hospital last month after complaining of breathing issues.

Saroj Khan’s demise has shattered her family members and industry friends. Bollywood came forward to offer their heartfelt condolences to the family. Actors like Madhuri Dixit, Kajol, Abhishek Bachchan, Shah Rukh Khan and many others who danced to ‘MasterJi’s moves are heartbroken over the loss and expressed their grief on social media.

Meanwhile, Khan’s last remains were taken to the Awais-e-Qarni Muslim Kabristan in Malad, where she was laid to rest early morning in presence of close family members and friends. The late choreographer’s daughter broke down in tears outside the Kabristan as she bid adieu to her mother.

Saroj Khan’s youngest daughter Sukaina Khan opened up about her late mother and called her a hero. Speaking to Pinkvilla, Sukaina said:

"My mother was my hero. She was the greatest influence in my life. She was both a mother and father to me. She was very lenient but at the same time, wanted my etiquette to be perfect. She loved me being around her since I'm the youngest. My mum was my fighter. From the age of 13 to 71, she has done everything to fend for us and give us a full life. She has never complained and was the man of the house."

Saroj did not have a very smooth life and had to face some struggles in her personal life. She got married at 13 and had her first child when she was 14 years old. Later, her marriage did not work out and she had to raise her kids single-handedly. But despite the tough times, she braved them all and emerged as a winner for her kids.

“Every woman would agree with me that raising children alone is a very difficult job. And when you have a few other family members depending on you, it becomes all the more difficult. She never had a frown on her face” her daughter added.

Speaking of her health conditions, Sukaina mentioned that after her mother complained of breathing problems, her test for Coronavirus was conducted. The COVID-19 test had come negative but her breathlessness got worse day by day. Then, two days ago her diabetes worsened and she had a cardiac arrest at 1.52 am.

May her soul rest in peace...You will be missed, Saroj Ji...

Sonali Raut & Natasha Suri to be seen in MX Player's ...
41 minutes ago