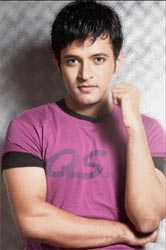 Shashank Sethi who was seen playing the role of Keshav in Zee's Chhoti Bahu will now be seen in Star Plus' Sajan Ghar Jaana Hai.

Earlier, it was shown that the marriage of Madhu aka Abigail Jain who is the sister of the main protagonist Amber (Kunal Bhatia) has been fixed. The boy's family members had been shown, but the boy had not made his entry.

We now hear that Shashank Sethi will play the boy opposite Abigail. The story will now move towards their wedding.

When contacted, Shashank confirmed the news and said, "Yes, I play the role of Avinash. He is a very positive character, loving and caring in nature".

The actor has started shooting for the show, and his entry is expected sometime in the coming week..

honey7 12 years ago We all Shashank's fan want to see him more on Sajan Ghar Jana Hai...

honey7 13 years ago You looking great in the serial...
but we hope to see you more.

sappi.m14 13 years ago Hey this is a great news that we would get to see him again on T.V. He is such a cute looking guy and i hope this time he stays there for a much longer period....I know u have a long long way to go and we would be there to support you always....All the best!!!

honey7 13 years ago Excellent...
I am very happy that we can see him again, as he is a very good actor and has a charm which bound the audience...
I wish him my best wishes...

+ 3
13 years ago Congrats to him. I am glad he got a positive and meaty role. He was wasted in CB.

+ 5
13 years ago Aww, they will make a nice couple !
But i wish they both were Leads too though !