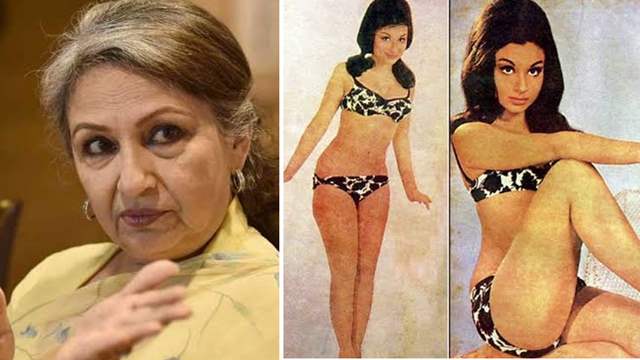 Veteran actress Sharmila Tagore made her movie debut in 1959 with the film. She became an evergreen sensation by delivering some memorable performances in films like 'Amar Prem', 'Kashmir Ki Kali', 'Mausam', 'Chupke-Chupke', 'Aradhna.’ In a career spanning four decades, she has won two National Awards and two Filmfare Awards including a Padma Bhushan.

Sharmila sparked a controversy when she posed in a bikini for a magazine cover in 1966. She was one of the first actresses of that time to make such an unconventional decision and sport a swimsuit on the cover of a pope’s magazine.

In a recent interview, she opened up about her bikini shoot and talked about how her choices have always been unconventional. "My life choices, looking back, have been unconventional. Like the bikini shot for Filmfare, that people don't ever let me forget," she said during a session with her fans, hosted by Film Companion.

As per a report in Filmfare, it was Sharmila's idea to pose in a bikini for the magazine. She had once said, in an interview to Filmfare, "I’ve no idea why I did that shoot. It was just before I got married. I remember when I showed the two-piece bikini to the photographer, he asked me, 'Are you sure about this?' In some of the shots, he even asked me to cover my body. He was more worried than I was but I had no qualms doing that shoot.”

The actress had said that only after she started receiving strong reactions for her bikini shoot, she was taken aback.

“Some called it a deliberate move to grab eyeballs; others termed me as ‘astutely uncanny’. I hated that. Maybe, there was an exhibitionist in me, as I was young and excited to do something different” she had said.

Taimur Yells at Media, Pregnant Mommy Kareena had to Stop him and Take ...

"To one of the most strongest & coolest woman I know": Kareena Showers ...