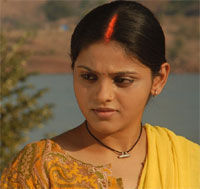 The innocent and loving friend of Laali, Shanichari who was earlier sold by her parents for money, will soon be seen making a comeback in Zee's Agle Janam Mohe Bitiya Hi Kijo..

According to our source, "Supriya Kumari aka Shanichari will don a new look, and will be shown in a brothel. Since the girl will be shown as a Kothewali, it is heard that she was asked to watch Ashwariya Rai's mannerisms in the number 'Kajre Re' from the movie Bunty Aur Babli".

After gaining a call from Anil Kapoor's production house for their forthcoming film, this comeback to Agle Janam albeit a diverse role is yet another feather in the cap for the talented Supriya!!

Kareena's World 11 years ago she said the last part right..media ki beti......but i am really happy for her..gud luck for ur new venture

natashaa46 11 years ago i guess she'll bring a new twist in Lalli's story!!

sitakshii 11 years ago yes minu(minakshi)
def shanichari wud help out her best frnd laali
it wud b great to see th eunion of 2 frnds again !!!

sitakshii 11 years ago thanks for the article
i always loved the actress who played shanichari
it seems laali & shanichari wud soon meet !!!