He has just completed a Hindi film where he plays an older man in love with a 24-year girl. But he's not at liberty to talk about the project.

'A late bloomer for sure,' laughs Aditya. 'But then who decides what's the right age for anything in life?'

'I've always gone where my heart takes me. I left India, directed films abroad and came back after 25 years. Now I want to act. It's never too late,' Aditya told IANS. 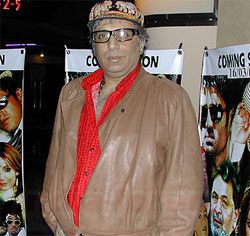 Aditya aspires to do the kind of roles Sanjeev Kumar used to play.

'I'm nowhere near my father. And I don't aspire to be. I want to slot myself in the kind of roles that Sanjeev Kumar used to do. Or for that matter Mr. Amitabh Bachchan. Man, what a phenomenon! He has paved the way for all the young-at-heart 50-plus actors who want to play the lead.

'In a film like 'Cheeni Kum', Mr. Bachchan has taken screen romance to another level. If it wasn't for him I wouldn't dream of turning an actor at my age.'

After Ranbir Kapoor, who's half his age, Aditya is happy to be the latest Kapoor to make his appearance on the shimmering screen.

'I'm very happy for Ranbir. He has done all of us proud. His father, Rishi Kapoor, has acted in two of the films I've directed - 'Sambar Salsa' and 'Don't Stop Dreaming'. Both the international projects are in English.'

'Not too many people know of Taz's acting debut in my film. Just like they'll be surprised when they see Shammi Kapoor's son acting at the age of 51.'

'Producers have already come to know that the oldest Kapoor debutant is available,' laughed Aditya. 'But that doesn't mean I've put my directorial career on the backburner. My next directorial venture 'Balti Devi Queen Of Southall' with Rakhi Sawant is very much on.'

The project got delayed when the film's leading man decided to do television and, that too, in a flop serial. That's when the project's financiers deserted Aditya.

'And that's when I decided to let the actor within me take over,' revealed Aditya. 'Direction is far more time consuming. Acting, which is in my genes, is far quicker and a financially rewarding process.'