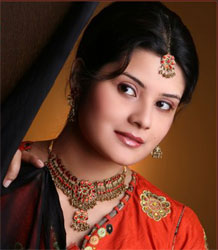 The Star Plus family drama Santaan has a new entry, Shamin Mannan who will play the girl opposite Shubh, played by Gaurav Khanna.

Shamin will don the role of Neha, who is caught in the clutches of a Don. Wearing a drop-dead white salwar in the entry scene, this actress with her gorgeous looks left everyone mesmerized.

The actress with artistic eyes and sheer natural beauty, Shamin talks about her character in the serial. “Mine is a positive role of a simple village belle who is trapped by a Don. Shubh played by Gaurav Khanna is working for the same Don. He falls in love with me at first sight and ends up saving me from the Don.” The young girl is a newcomer when it comes to daily soaps of television, but has a past record of being a part of many catalog shoots, print advertisements and has also done one episode in CID.

With such gorgeous looks and good acting skills, Shamin is surely on the right path to stardom!!

14 years ago i love Gaurav khanna!!:) and i was upset seeing his onscren character soo angry and depressed!! hopefully now hw will b ok!!! thnx!!

+ 3
14 years ago finallY! something interesting aha, cant wait to see.

rahul_game 14 years ago she really rocks...shubh and neha are the most beautiful couple...love to see them together..

14 years ago thanks...she looks gorgeous and her eyes are very angelic..looking forward to see and hear more of her...

+ 4
14 years ago She's really beautiful, but somehow I can;t imagine her with Shubh :S