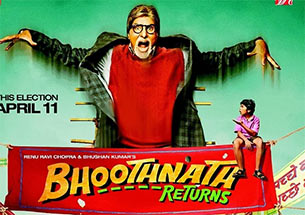 "Bhoothnath Returns" will see Amitabh Bachchan's character of a ghost contesting an election -- but in real life the megastar has no such plans.

When asked that with the film having a political background, what is your take on politics and would you like to join politics, he told IANS in an email interview: "I am apolitical and and no, I shall not join politics."

The 71-year-old, who had contested Lok Sabha elections from Allahabad in 1984 and registered a massive win, resigned after three years of his tenure as an MP.

After that he has abstained from politics as he believes that he is not cut out for it.

Jaya Saha to be Arrested by the NCB Soon: Report
41 minutes ago