Enjoy yourself while studying!!! If you are thinking how this can be made possible, then hear what King Khan has to say about the same. Shahrukh Khan was seen promoting his new quiz show Kya Aap Panchvi Paas Se Tez Hai? by flagging off the Paanchvi Pass Express at Bandra yesterday morning at 8.30a.am. 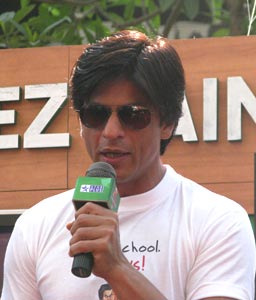 Featured Video
Juggling time from his hectic schedule, the nation's heart throb Shahrukh was at the venue dot on time, but due to the IPL could not wait for long. As he flagged off the Express, he gave out a message to all his fans saying that you can study as well enjoy yourself at the same time. He also claimed that "Education is a step in the right direction".

King Khan also stated that once the audience starts to watch the show they can judge if one is better than a fifth grade student or not! This show will make us aware of how much the fifth grade students have to remember. He also gave out a message on the board which stated, 'Aap Padte rahen, Aagee Badte Rahen'. This board along with the Express van now takes off to all parts of the country..

As we are just one week away from the very unique 'Kya Aap Paanchvi Pass Se Tez Hai?' to kick-off on the small screen, all SRK fans are joyous as they get to see the Bollywood Badshah back on TV, after his success as a quiz master in Kaun Banega Crorepati.

14 years ago ashutosh sure did a lot of hard work on this movie..... hope it is as good as lagaan (actually even better)

14 years ago can't wait for this movie, hope is great and not a let down

14 years ago great another show where they copy the americans

Cnt wait for this show =]