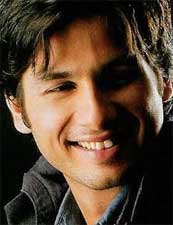 Actor Shahid Kapur, who had taken a fancy to bikes and splurged Rs.1.5 million on one, has now found a new interest. He has been attracted to photography.

Shahid has purchased a new expensive camera, the D50 from Cannon.


'Cameras are not allowed on sets usually. But, lately Ken Ghosh and Ahmad Khan get blinded by flashes on the sets of one of Shahid's ventures, only to realise that it was none other than the actor taking candid shots without their knowledge, much to the unit's amusement,' said a source.