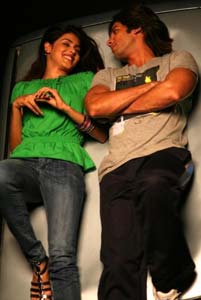 Out of all different movie promotion ideas, this one seems new. Bollywood actors Shahid Kapoor and Genelia D'Souza will be spending Wednesday night together in a car here to promote their forthcoming film 'Chance Pe Dance'.

'Shahid and Genelia will be spending a full night in a small car at the Kamalistan Studios today. There will be vada pao (bun) vendors and khatiyas (string cot) nearby for the people. We want to make this the most talked about promotional activity in Bollywood and it's being done on a major scale,' a source from the film unit told IANS.

In the film, Shahid plays a struggler who comes to Mumbai to make it big in the movies. According to the source, the activity was planned as it bears semblance with the lives of those who come here to try their luck and also because a scene in the movie depicts it.

'This activity has similarities with our movie. In fact in his own days of struggle, Shahid used to sleep in a car many times. In the movie also, there's a scene where these strugglers have to spend nights altogether, because they have no place to stay,' added the source.

The activity will continue till Thursday morning and those who will be present there will be able to share tea and bun maska (bun and butter) with the stars. It will be served at 6 a.m.