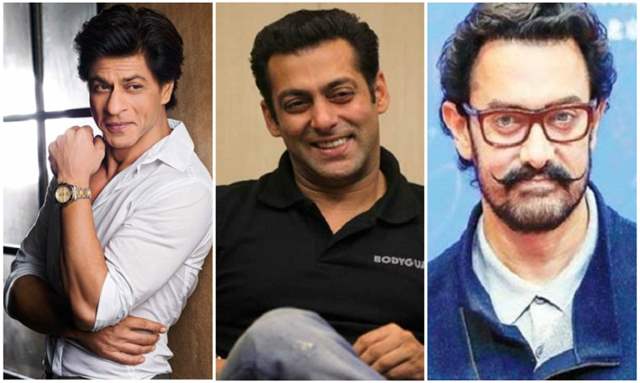 The three Khans of Bollywood, Shah Rukh Khan, Salman Khan, and Aamir Khan, have always been the talk of the town, no matter what they do. Their success, failures, their good deeds or bad deeds always keep their fans entertained. It seems like their recent secret meeting at SRK’s bungalow Mannat is doing the same.

According to reports, Baadshah along with Salman and Aamir spent hours together. The trio had a quiet conversation on their careers and the meeting went on till 8 pm. A Filmfare report claimed that the three actors met at Mannat and “spoke for hours and had a gala time with good food and drinks flowing in”.

When informed the fans about the same, this is how they reacted:

Once considered the most bankable actors, all three Khans had a bad year at the box office in 2018.

Shah Rukh last appeared in Aanand L Rai’s Zero and the film flopped at the ticket windows. It also featured Anushka Sharma and Katrina Kaif and was also panned widely by critics. According to recent reports, SRK is all set to make his Tamil movie debut by playing the villain in ‘Thalapathy's 63’ opposite south superstar Vijay.

Aamir, on the other hand, featured alongside Fatima Sana Shaikh, Amitabh Bachchan and Katrina Kaif in Vijay Krishna Acharya’s Thugs of Hindostan, which again, failed to impress the audiences and critics. Aamir is currently preparing for Laal Singh Chaddha - an official remake of Forest Gump.

Only Salman had a considerably better show at the box office with Race 3 raking in a good collection. However, the film received a lot of flak from critics. Directed by Remo D'Souza, the film also starred Bobby Deol, Jacqueline Fernandez, Anil Kapoor, Saqib Saleem, and Daisy Shah. Salman is gearing up for the release of Ali Abbas Zafar’s Bharat alongside Katrina Kaif, Tabu, Nora Fatehi, Jackie Shroff, Disha Patani and Sunil Grover.

Citing the recent box office performances of the three actors, it is being speculated that the trio might be planning a big project together, to help each other’s career. It might be fun to watch what the star have up their sleeves.