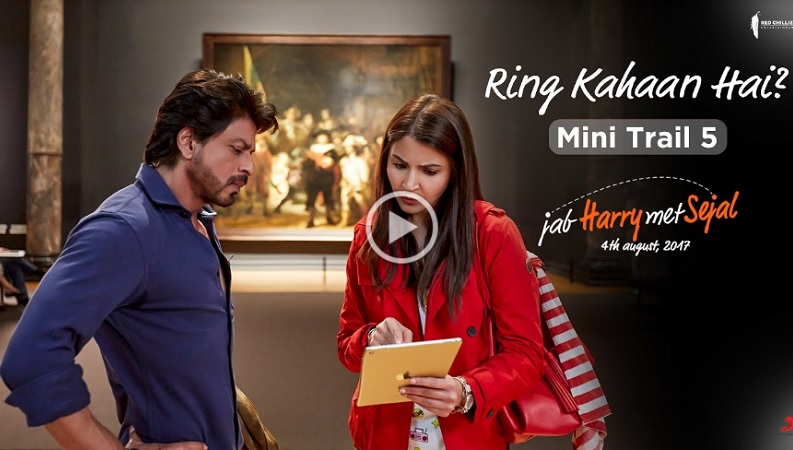 Taking forward their unconventional marketing approach, Red Chillies Entertainment has successfully gotten the audience hooked to its mini trails. These micro units have given us sweet glimpses into the characters of Harry and Sejal. The latest mini trail, which is the fifth in the order introduces the audience to a new character, the ring. It shows Harry and Sejal looking for the ring all across the beautiful European terrains.
To establish the importance of the ring in the story, the makers have partnered with Twitter India to launch a custom emoji of a ring alongside the hashtag of the film. In each tweet by a user with the hashtags related to the film- #JabHarryMetSejal #JHMS, the emoji of a ring automatically appears at the end of the hashtag. This indeed is a very cool way of emphasising the key element of the film to the audience prior to its releases.
Talking about the activity, Binda Dey, Marketing Head at Red Chillies Entertainment said, "The ring emoji was planned keeping the communication of Mini Trail 5 in mind. While Harry and Sejal are looking for the ring in the Mini Trail, fans can use the hashtags related to the film and find the ring connect on this platform."
"Twitter is the best place to discover what's happening in the world of Bollywood. The custom emoji intrigues the audience to learn more about the film and offers the opportunity to have shared experiences with their favourite stars Shah Rukh Khan and Anushka Sharma on Twitter," says Viral Jani, Head of TV & Entertainment Partnerships at Twitter India.
After looking for the ring in mini trail 5, Anushka Sharma took to Twitter to launch the emoji:
Here's the Mini Trail 5 if you've not seen it -
This indeed is another masterstroke in building the connect as well tapping on to the massive fan following of the both- Shah Rukh Khan and Anushka Sharma on Twitter.
Directed by Imtiaz Ali, Jab Harry Met Sejal releases in cinemas on 4th August 2017.
0 Likes

Shaina_b 3 years ago This is indeed a great idea!!!