Aziz Mirza's 'Kismet Konnection' does not star Shah Rukh Khan, the leading man of his previous films, because the director feels he is now too old to play young roles.

'Shah Rukh is too old for the role in 'Kismet Konnection'. The role is about the life of a 26-year-old and Shah Rukh is 40 plus. It doesn't suit him,' Mirza told IANS over phone from Mumbai.

But Mirza has his other blue-eyed actor Juhi Chawla in a supporting role.

'Juhi does a little cameo role in the film. She has done it exceptionally well and I am very happy with her,' he said. 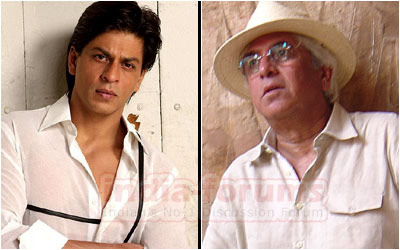 Shahid Kapur, known for his chocolate boy looks, was Mirza's choice to play the protagonist opposite Vidya Balan. But this pairing has come under much criticism.

But the seasoned director insists they make a good pair. 'If they would not have paired well, why would have I cast them together?

'Shahid and Vidya look very nice in the film and that is the reason why I've cast them. I come from a socio-political background and I have made the film keeping my sensibilities in mind.

There were media reports about Vidya looking too 'mature' for Shahid, but Mirza rubbishes them all.

'I don't think she looks old. It's the media image that has been created after her role in 'Parineeta' and probably that's stuck on to her,' he said.

'Kismet Konnection', which releases July 18, is the story of an architect running out of luck and how he meets a girl who becomes his lucky charm.

Mirza, who has earlier made movies like 'Raju Ban Gaya Gentleman', 'Yes Boss', 'Phir Bhi Dil Hai Hindustani' and 'Chalte Chalte', took a hiatus from the film industry after his wife's death but returned last year to announce this venture.

'I have been out for a long time. It is my children who asked me to come back. I was working on some other scripts, but when my daughter shared the script of this film. I asked her to work on it,' Mirza said.

The director thinks the film is truly unusual and says it was made almost effortlessly.

'Somehow I feel that the film was destined to be made. From the time we got ourselves involved in it to the release, it is happening all on its own,' he said.