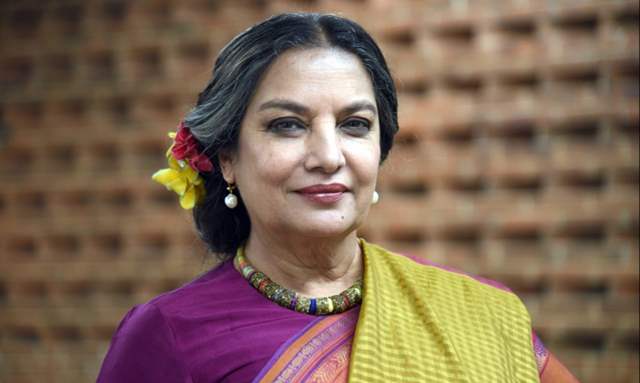 Shabana Azmi is known throughout the globe for her extensive work on and off the camera and her deadly car accident in January this year sent shock waves across the globe. Shabana Azmi’s fans prayed for her well-being and the actress soon recovered from her injuries.

For the uninvited, Azmi recovered from the shocking incident which had occurred on the Mumbai-Pune-Expressway. The 69-year-old actress was severely injured and was rushed to the nearby hospital from the accident spot - the MGM hospital in Navi Mumbai. Later, she was shifted to the Kokilaben Dhirubhai Ambani hospital.

Now, in a recent interaction with Times of India, she spoke about the accident and said, “I had fainted. I was told it was a very close shave. Because of the injury to the brain, I can say that I have a brain (smiles). But 40 days later, I resumed work for ‘Halo’ in Budapest and now I am shooting for Nikhil Advani's ‘Moghuls’.”

Speaking how she kept herself going amid the devastating accident she said, “Work keeps you going and you need to carry on. I received so much respect and concern from all parts of the world during that accident period and I think that's one of the main reasons I recovered.”

“And I still go off to Khandala. I have to be a little careful of course but aisa bhi nahin ki saara time wohi sochna hai. I think we need to lead life to the fullest,” added Shabana as she admits not dwelling upon her accident.

Amid the Coronavirus pandemic, Shabana Azmi partnered with a few NGOs to help the needy, underprivileged, migrant, and daily wage workers amid the lockdown. She has successfully provided ration, cooked meals, and sanitation products to 10 lakh people across 172 districts.