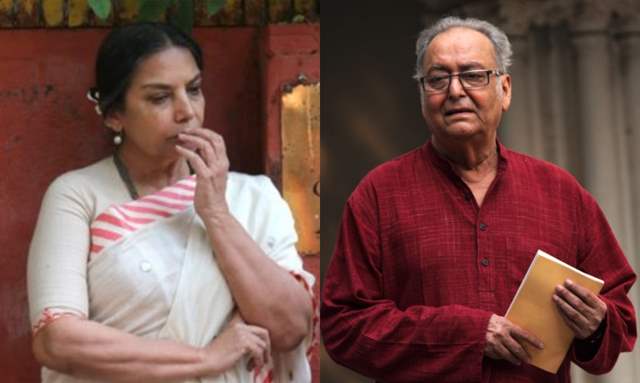 Veteran Bengali actor Soumitra Chatterjee shared a close bond with his co-stars and they are taken aback by the recent news of his sad demise. Shabana Azmi remains to be one of the most co-stars from the quintessential group who revolutionized cinema in India.

Shabana Azmi is currently shooting for Steven Spielberg’s web-series - Halo in Budapest and she is filled with a sense of unreality after being informed about Soumitra Chatterjee’s death.

She said, “It was a rude reminder that even the greatest have to go. I had the rare privilege of playing both his wife and daughter. But then he had the rarest privilege of doing fourteen films with Satyajit Ray. I was in a film group that was honored at the prestigious George Pompidou Centre in Paris sometime in the 1980s and it was so incredible to watch the adulation showered on him by French fans.”

During her recent interaction with SpotboyE, the actress remembered her time in Paris with Chatterjee. Mourning the loss of the legendary actor, Azmi was struck my Soumitrada’s modesty and said, “In Paris, they called out to him as Apu (from Satyajit Ray’s Apur Sansar) and Amal (from Ray’s Charulata) and rushed to get photographed with him. Soumitrada seemed to take it all in his stride and said modestly, ‘It’s because Ray made these characters so memorable that I’m reaping the benefits.’ I was amazed at how lightly he wore his fame. You see the same modesty in Lata Mangeshkar and Steven Spielberg.”

In a career span of 61-years Soumitra Chatterjee collaborated with Shabana Azmi on a few occasions and they shared conversations on life, fame, and more.

Reminiscing her experiences of collaborating with the legendary actor and co-actor Soumitrada, Shabana said, “I had the honor of working with him as his wife in Nicholas Klotz’s film La Nuit Bengali co-starring distinguished British actors Hugh Grant and John Hurt. Much later I played his daughter in Aparna Sen’s 15 Park Avenue. He was a charming and great company to be around because he was well-read and could speak on many subjects.”

Shabana concluded, “I was in touch with his daughter the last few weeks and am deeply saddened by his death. I had hoped and believed he would recover. He will be missed greatly. But his great work will live on forever.”

Sharmila Tagore says ‘I feel I’ve lost a part of me’ as opens up ...