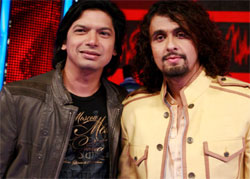 Renowned playback singer and successful television host Shaan will be a celebrity guest on Saibaba Telefilms' Chhote Ustaad - Do Deshon Ki Ek Awaaz on Star Plus this weekend. The accomplished playback singer is no stranger to the Chhote Ustaad platform, and is very popular with kids and adults alike. For the very first time in the history of their singing career the two musical legends get together to perform on television. This Saturday's episode at 9 pm on STAR Plus has Shaan singing with Sonu Niigaam for the very first time ever!  With their very good personal and professional rapport, Shaan and Sonu set the stage on fire with their electrifying performance.

Shaan has not only released very successful albums like Tanha Dil and Aksar, but also sung for many hit Hindi, Bengali, Telugu and Tamil films. Sonu's songs have been featured in numerous Hindi, Kannada movies, Marathi, Tamil and Telugu movies. He has also released numerous Indi-pop albums and acted in a few Hindi feature films. It's a treat for viewers to watch both these immensely talented voices sing, Dus Bahane in perfect sync with each other.

Also don't miss Saturday's episode as many secrets are revealed during the Friendship Test. Sonu reveals that Omi is seeing someone else and the host goes running for cover...Shaan puts Sonu in a spot by declaring that he will reveal one of Sonu's best kept secret…something that Sonu doesn't want the world to know…What secret is Sonu scared to reveal to the world?

Yuvika_15 10 years ago sonu is a great singer n so is shaan..wil b gd seein thm sing together

Mazzy101 10 years ago ooh i cant wait! i love sonu nigam and shaan! thy are excelent singers and are very nice!

Nikhi. 10 years ago They're both fantastic singers; can't wait to see them together! :)

RJ.. 10 years ago WAOOOOOOOO I WILL WATCH THIS EPI BECOZ I LOVE SONU-SHAAN BOTH SINGERS VOICEEE

fardee 10 years ago Great!!! I was just dreaming to hear both of them together............i just luv both of them.Great singers

~*puja*~ 11 years ago that''s great for women to be finally doing something else in films besides acting and singing!

"Sushant Singh Rajput died by Strangulation and Not ...
50 minutes ago

Roadies Revolution: Double eviction and many more surprises ...
56 minutes ago