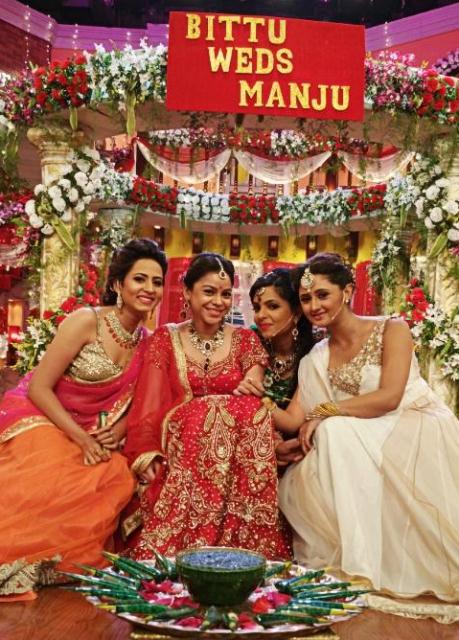 K9 Production's popular show Comedy Nights with Kapil on Colors, is trying all possible ways to entertain masses to the core with its rib ticking acts and funny gags.

Many popular personalities such as actors, cricketers and more have come on the show for promotional activities and to tickle their funny bones of the viewers. Adding more entertainment quotient to the show, the makers have now planned another wedding to amuse viewers. Well, to one's surprise, this time it is Bitto and Manju's wedding after Bua's (Upasana Singh) wedding.

Our source says, "This time it will be Bitto Sharma (Kapil Sharma) and Manju's (Sumona Chakravarti) marriage sequence. This marriage will comprise of ceremonies such as Mehendi, sangeet and more."

"Popular actresses Rashmi Desai, Sargun Mehta and Sugandha Mishra will be seen in this particular episode and will be from the bride's side. In this sequence for the first time audience will see Manju's entire family as they have only seen her father and brother," adds our source.

When contacted Sargun, she said, "It was really an amazing experience as it was a laughter riot. It will be a crazy wedding and for the first time they will show Manju's family and audience will realize that why Bittu used to make fun of her family. There will be all the ceremonies shown. I won't divulge much information about the episode as I want to keep the interesting part under wrap so that it can be a surprise for the audience."

Well the episode seems to be very interesting and fulfilling to make the weekend filled with laughter.

+ 2
6 years ago sargun mehta u r a fab actress. want 2 see u soon in sum v.gud show like phulwa & phulwa like strong ckt