Mehta and Seema have one thing in common. They both badly need to loosen up. Seema has been doing un unbroken series of stern, wretchedly unhappy characters, including the unforgiving mother in Sooraj Barjatya's 'Vivah' and the profoundly grieving widow in Deepa Mehta's 'Water'. 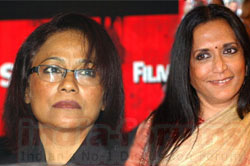 Mehta has been going through her own bouts of depression after shooting the story of a battered wife in 'Heaven On Earth'.

'It is a film called 'Stella' about the joyous adventures of a wacky nanny. I just thought Seema was so right for it. So far we've only seen her in serious roles. Seema has an innate sense of fun and mischief which nobody has tapped,' Mehta, who wraps up 'Heaven On Earth' with Preity Zinta in Chandigarh, told IANS.

'I'll be co-directing the film with my brother Dilip Mehta, before going into my next big project 'Luna' with John Abraham. I hate to praise my own family. But Dilip is a very talented filmmaker,' said Mehta who is all set to whoop it up with a comedy.