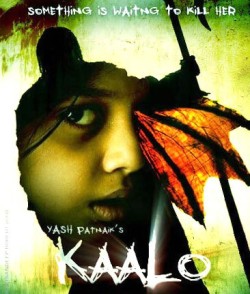 The latest we hear is that for endorsing the movie Kaalo, Little girl Swini Khara (of fame Cheeni Kum) and Aditya Lakhia, lately seen in Zee TV's Agle Janam Mohe Bitiya Hi Kijo as Nanku (Laali's father) will be seen in the show. " The Kaalo team will grace the sets of Rang Badalti Odhani today and the episode will be aired before 17th of this month."

" Swini will enter the house and will go through some scary incidents like some blood on the floor, later on when the leads (Yashashri Masurkar and Karan Tacker) asks about the reason behind the happening, Swini will explain the reason behind but at the same time asks the leads to watch the movie to know whats next," says source.

We contacted the creative of Rang Badalti Odhani and he says, " Yes, the cast is on its verge to come on the sets today and will do some promotional scenes with us."

We also contacted Karan Tacker and he too confirmed the buzz, " Yes, it's a scary shoot for us and we are looking forward for the sequence to be shot."

That means now Rang Badalti Odhani will go in a scary way for an episode.

nupurdas1 6 years ago Misss RBO... so much...
Love u Karan Tacker & Yashashri Masurkar .

OlicityFan 9 years ago karan was not shown for this!...only jaskaran and yasha!

WooHooHaha21 9 years ago I seriusly gotta watch this for sure!! =D =D

destinylove 9 years ago oH!!that was really scary!!Swini Khara acted very well to scare us in the promos of kaalo shown in RBO

WooHooHaha21 9 years ago Hmm.. Nice idea.. Looking forward to it..

Sairaaaa 9 years ago Hope to see them soon...hope it goes well with the current track as khichidi promotions looked very misplaced with the previous track!