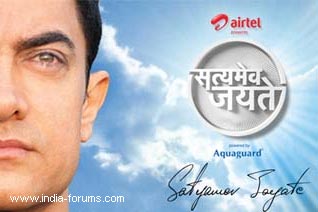 social issues backed by statistics, has surpassed his own popularity, indicates a survey on online Google searches.

The first episode of "Satyamev Jayate" was aired May 6 on Star Plus. Its concept was kept under wraps till then, but now it has become a winner thanks to issues like female foeticide and child sex abuse, and the way Aamir conducts the show.

According to Google India, the country's netizens are searching more for the show as compared to online hits for 'Aamir Khan'.

In a search through Google Insights, a service to find out about trending issues, it has been found that between the keywords "Satyamev Jayate" and 'Aamir Khan', the show is said to have attracted more people over the past seven days.

As per available data, the show's popularity seems to be capturing Madhya Pradesh the most as it is driving the most number of searches. Rajasthan is next on the list, and Gujarat takes the third spot.

AR002CH 8 years ago I am amazed it took a Bollywood star to bring these atrocities out in India. This tells me people in India are living in a bubble and think that this does not goes on in there community. People will shake their heads and agree on these things but the big question is what will be done about it and I have an answer NOTHING. The Indian Culture is all about ME how can I make more money how can I steal, cheat and hurt other people to benefit. The mentality is not going to change.

8 years ago this show is tuley very well shown and informative for the audience. it is keeping us aware of what INDIA is like...and i believe this show will bring imnporvmenets in the country..
JAI HIND

8 years ago Satyamev Jayate is truly a superb show and this is proven by the fact that it has more trps than any other daily soap!

+ 5
8 years ago a creator's best gift is when his creation surpasses his fame n become a bigger name than his ... AAMIR will be d happiest person with ds article .. love AAMIR .. he is d best n he has delivered d best show ever made in INDIA

+ 3
8 years ago Awesome show..Good to see people loving it as it truly deserves to be watched ...Great Job Amir ..

8 years ago wonderful and must watch show
hats off to Amir...