Mumbai, March 28 (IANS) Actor-director Satish Kaushik is so taken in by singer-actor Himesh Reshammiya that he has asked him to compose a promotional song for his forthcoming teen romance 'Tere Sang'.

'Tere Sang' needs a promotional prop and who better is able to provide it than Himesh?,' Kaushik, who made 'Tere Naam' with Salman Khan, told IANS.

'They're such professionals and so clued into t 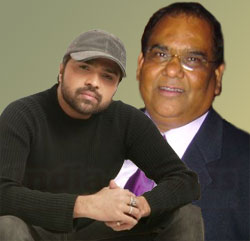 Featured Video
he technicalities of cinema. I was amazed by Reshammiya's ability to deliver long dialogues with the right pauses for breath and punctuation. This rhythm in the speech patterns is generally lacking in our film actors. The last time I saw an actor conveying the same rhythm in speech was singer-actor Kishore Kumar.'

As for Urmila, 'The last time I worked with her was when I was assisting Shekhar Kapoor for 'Masoom'. She was just a child then. In between we were supposed to do a full-on masala film called 'Bus Conductor', but she opted out. Now for 'Karzzz' she's so passionately involved.'

Kaushik, who is currently confined to bed after a surgery, said: 'Coincidentally, both my 'Tere Sang' hero Ruslaan Mumtaz and I are currently confined to bed. He is so accident-prone. While we were shooting 'Tere Sang' he fell off the bicycle and had a serious injury. Now he has torn a ligament in his knee while I am recovering from a minor surgery. This is a good time for me to work on the music of our film.'

Once out of the hospital, Kaushik plans to shoot an ultra-romantic song with Urmila and Himesh titled 'Tandoori nights'.

'It's sung by Sunidhi Chauhan and Himesh. I'll shoot it as soon as I'm out of bed,' declared Satish.

'It'll take me some time to recover. And then I go straight into a long schedule of 'Karzzz' in Mumbai. And then we're done.'