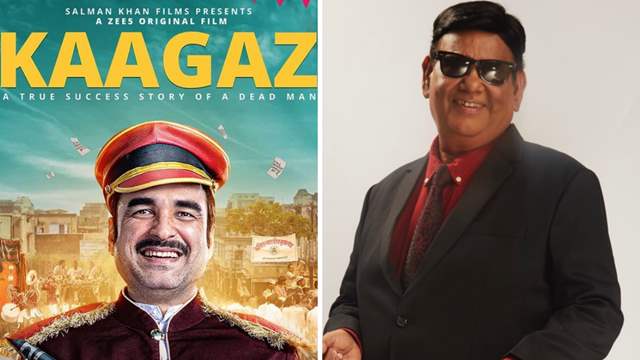 Veteran filmmaker-actor Satish Kaushik has many works to be proud of including the likes of Tere Naam, Hum Aapke Dil Mein Rehte Hain and Roop Ki Rani Choron Ka Raja, Humara Dil Aapke Paas Hai, Mujhe Kuch Kehna Hai, among others, which he has directed over the last two decades.

And, after a break of about six years, he is looking forward to his directorial comeback project, Kaagaz. A satirical comedy based in a small village in Uttar Pradesh, Kaagaz is the real-life story of Lal Bihari Mritak, a man who was declared dead.

Starring talented actor Pankaj Tripathi in the lead role, the film is presented by Salman Khan Films with Satish Kaushik Entertainment Production and produced by Salma Khan, Nishant Kaushik, and Vikas Malu. The story of Kaagaz has been conceptualised and directed by Kaushik and he proudly says that the film gave him an opportunity to reinvent himself, not just as an artiste, but also as a director.

Talking about what drew him to make the film, Kaushik says:

I read a news article about Lal Bihari Mritak many years ago and I was touched by his journey. When I researched about him, I felt that his story deserved to be told and I wanted to do that myself. That’s why I decided to helm this project after a gap of six years. The times have changed and so have a lot of aspects of filmmaking. Directing this movie was a huge learning experience for me, not just as an artiste but also as a director. I’m glad we got Salman Khan Films as our production partner and ZEE5 to showcase it. I’m sure people will connect with the story and appreciate our efforts.

The trailer of Kaagaz released a few days ago and has been garnering rave reviews. The strength of the film lies in the way it tackles tragedy with humour. Pankaj Tripathi plays the protagonist, Bharat Lal Mritak, in the film and Kaushik also plays the pivotal role of Bharat Lal’s lawyer.

Kaagaz will release as a ZEE5 Original on January 7 and will simultaneously have a theatrical release in Uttar Pradesh.