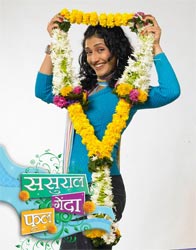 Ravi Ojha's Sasural Genda Phool on Star Plus has been one serial that has been well appreciated by masses. The channel and production house wanted to come up with something different that would change the meaning of shows on television.

The show has now seen one of its first major achievements, after garnering an average rating of 2.1 for the first time.

When contacted, Zama Habib, Writer of Sasural Genda Phool said "We are very happy and overjoyed that our hard work has paid off. We believed in our show, and wanted to come up with a different show. It is a good sign that viewers have accepted the show".

Talking of the USP of the show, Zama said, "It is the simplicity and the slice of life flavour, something which reminds one of the Basu Chatterjee and Hrishi Da style that the viewers liked. Though the numbers are important, we did not work to gain TRPs. Our aim was to offer a subject close to reality".

Ragini Khanna, the protagonist of the show was equally elated at the rise in numbers. "I am super proud of being part of Sasural Genda Phool. Considering that we were put at an early evening slot of 7.30 PM, the response has been great. Above all, the manner in which audience has accepted the anti heroine Suhana is simply fabulous (smiles). This TRP boost is a motivation for us, and we hope and pray that TV gets more varied content in the days to come. For me, the journey of Suhana has been very challenging, and I am thankful to Ravi Ojhaji for giving me this role. I am a blessed child, and I keep getting roles that always challenge the actor in me (smiles). We will now work to gain better numbers".

We wish the team of Sasural Genda Phool all the success..

jubie 9 years ago Love SGP. Perfect family drama and great work by everyone.

10 years ago great concept, fantasticily simple and adorable, and the humour is great also!!!
now this is a true family drama which everyone can and does watch and enjoy!!!

10 years ago a truly amazing show... i love it like anything!

10 years ago the show is really interesting.nice timepass.

10 years ago I love this show.
Ragini is just amazing