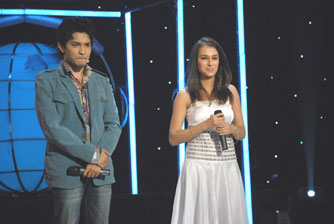 Who can forget the Emraan Hashmi club song “Woh Ajnabi” from the movie “Train”. Aditya and the contestants will be starting the Friday’s episode singing this song. In the last episode we saw Vishal Shekhar, during the versatility issue, had pointed fingers at Amanat saying he can sing only one genre songs. To that Ismail Durbar had given a challenge saying that he will make Amanat sing something different next week to prove them wrong. And on Friday Amanat Ali is going to sing Punjabi Pop song “Dil Lutiya”. And he gives a brilliant performance on the song and wins the appreciation of all the mentors. Vishal and Shekhar are now forced to finally accept on sets that Amanat IS a versatile singer.

Friday is also the elimination rounds. Raja Hassan is turning into viewer’s hot favourite. Because of his wonderful performance last week he receives the highest votes second time in a row. It is the “Maiya Maiya” girl Mauli Dave, Punjab da Puttar Harpreet and Mumbai guy Apurva who gets the yellow light. Do watch the Friday’s episode to see who gets eliminated among the three. 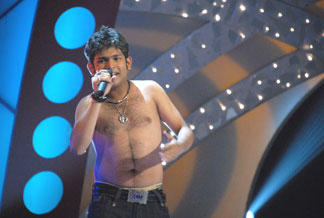 Saturday is the episode where the show gets a new judge as Special Guest. This week it’s none other than Salman Khan and Lara Dutta who were on the sets for the promotion of their new masala mix comedy movie “Partner”. The episode starts with Aditya again singing a song with the participants and this time a never heard song from the movie “Partner”. After the performance is the grand entry of Salman Khan on the sets of SaReGaMaPa. The meeting of Salman and Aditya brings some nostalgic memories to the duo. It was Salman’s movie “Jab Pyaar Kisi Se Hota Hai” where Salman Bhai had played the role of Aditya’s father. 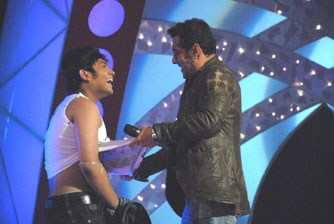 Salman Khan with Lara Dutta takes the seat of judges and that starts a new drama on the sets. Salman makes sure not to leave any chance to pull Himesh’s leg. Every participant of Himesh will be given comments by Salman keeping Himesh and his style of singing in mind. But the drama reaches its height when Aneek Dhar comes to sing. When Aneek announces that he was going to sing “Oh oh jaane jaana” Salman get very nostalgic as it was one of the super hit songs picturised on Salman. Salman then asks Aneek few times if he is sure of singing the song. Aneek was adamant. It was now that Salman without uttering a single word goes up the stage and strips Aneek. The audience gets too excited by this act of Salman as it reminded them the scene of Salman in the movie. Aneek was too embarrassed but never the less his performance is mind blowing again. Saturday will also show Junaid finally back to his form and he will make everyone dance to his tunes. 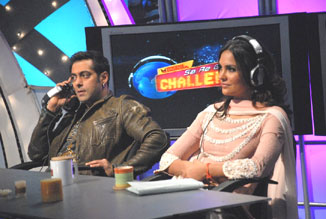 Seems this week’s show is full of not just Music but lot of masala mix too just like the movie “Partner”. Who gets eliminated finally this week? What will be Himesh’s reaction to the leg pulling been done by Salman bhai. And a big question of the viewers “Will the Maiya Maiya girl Mauli give a better performance if she gets saved this week?” To know all this, do watch the show on Friday 20th July and Saturday 21st July at 10PM...

YES I LOVE TO SPEAK ,READ AND WRITE HINDI BECAUSE I KNOW WHAT VALUE IT HAS IN OUR COUNTRY I AM PROUD THAT I CAN UNDERSTAND SUCH A BEAUTIFUL LANGUAGE........

taintedangel 15 years ago tnxs 4 the article mauli perfomed well on saturday she got 30 points:D :D she is back!!!!!!!!!!!!!!!!! rajaa hasan was awesome no doubt and salman lokked hottttt.

15 years ago nooooo harpreet?! if he gets out, i will seriously cry! so im hoping its mauli who's out..muahaha! lol

15 years ago i so wanted salman to come to saregamapa .

+ 3
15 years ago I can't believe Harpreet got yellow light.........wake up janta and vote for the talented singers.
Thanks for the wonderful article.

paulnarula 15 years ago time for Mauli to exit.There is only one Maaya Maaya.

+ 7
15 years ago Amanat is wonderful!! Glad his performance was so good :D Thanks for the wonderful article!