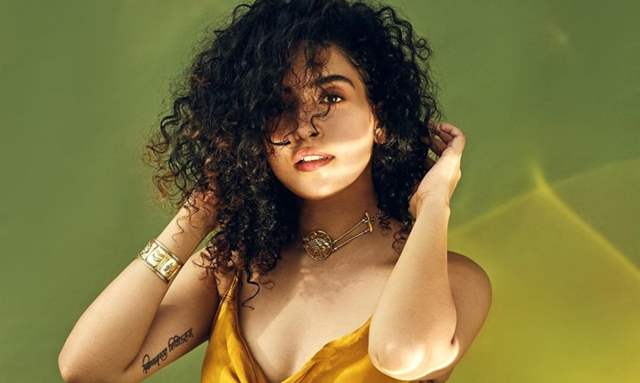 Looking straight in the eye with her head held high, Sanya Malhotra looks a total stunner on the cover of a leading magazine. The cover line reads- ‘A Girl like her: Sanya Malhotra on celebrating female genius’.

The actress, looking her sartorial best radiants freshness and glamour wearing a mustard satin slip dress, accessorising it with a statement piece of jewellery. Her dewy makeup and hair-do give a per cent dramatic aura to the cover.

Sanya took to her social media and posted, “Made it to Grazia’s August 2020 digital cover ???? Had a fun chat with the team about my character Anupama Banerji in #ShakuntalaDevi, the challenges I faced prepping for the role and more. If you haven’t watched the film yet, catch it now on @primevideoin #AmazonPrimeVideo."

Sanya Malhotra gave a bang-on performance and aced the many phases of a real-life character, Anupama Banerji in the Shakuntala Devi biopic. Playing Shakuntala Devi's daughter's character, the actress has been receiving rave reviews across for her character.

Sanya has portrayed 20 years of the real-life character— from an adolescent to a teenager, to a mature adult, a mother, a wife and it has been nothing less than a treat for the audiences. With such a beautiful character, the actress proved her versatility once again.

With a promising line-up of films, Sanya has many reasons to celebrate. After Shakuntala Devi, Sanya’s next projects includes Anurag Basu's LUDO along with Guneet Monga's Pagglait.

From Paatal Lok to Jojo Rabbit, here's what Sanya Malhotra is Binge ...

Sanya Malhotra Shoots for a Brand as the Lockdown Eases

Sanya Malhotra proves her versatility as she aces Anupama Banerji’s ...