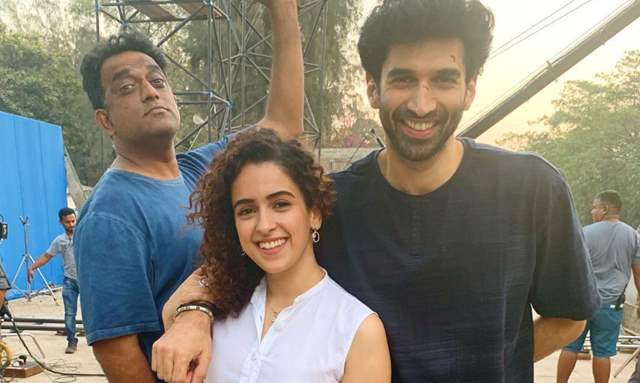 Sanya Malhotra has impressed her fans with the release of her much-awaited film LUDO and the actress has taken the spotlight once again with her brilliant performance. Sanya along with her co-star Aditya Roy Kapur have impressed the critics and their fans as well. The fresh pair was showered with positive reviews from all corners and their sizzling hot on-screen chemistry has exploded the screens.

During a recent interaction with Pinkvilla, the actress spoke about her chemistry with co-star - Aditya Roy Kapur who turned 35 today. She also mentioned about their bond on the sets of Ludo and shared, “I would give the credit to Anurag sir and Adi. They both made me feel so comfortable on sets, the shoot used to be so chilled out. It was not stressful, both Adi and I would be clueless most of the time and that is what we would jam on.”

Sanya spilled the beans about her times with Aditya on the sets of LUDO and added, “We used to talk about random things in between because Anurag Sir’s way of working is very different and unique, it is not rigid. It is not too stressful for himself and others, it is very free-flowing, that also helped our characters. It is the surrounding which helped us develop that chemistry onscreen.”

The on-screen duo’s stark appearance followed by impeccable performance has left the fans awestruck and they are left with wanting for more. Sanya and Aditya collaborated for the first time for the Basu film and the 28-year-old actress mentioned that she would love to work with Aditya again and hopes producers cast them together.

LUDO features the story of four distinct personalities with four different stories that overlap at the whims of fate, or by chance at the hands of one eccentric criminal. Apart from Sanya and Aditya, the movie also featured Rajkummar Rao, Abhishek Bachchan, Rohit Saraf, and Pankaj Tripathi in pivotal roles.

Meanwhile, on the work front, Sanya Malhotra will be seen in Guneet Monga's Pagglait and then Love Hostel opposite Vikrant Massey next as she has a lot in her kitty to impress us with.